By the 1990s, the Swiss dental implantologist Prof. P. Sandhaus, from Lausanne, had introduced metal-free ceramic implants made from zirconium oxide to the field of dental medicine. He, working with Prof. W. Schulte, from Tübingen, were the pioneers of ceramic implants at a time when titanium implants were also only at the start of their development process. Dr. Michael Hager, as a student of Prof. P. Sandhaus, gained clinical experience with the sigma-implants developed by Sandhaus just as more and more new ceramic implant developers were becoming inspired by the successes of zirconium oxide implants. Today, there are a large number of different implant manufacturers that are still using modified forms of the zirconium oxide implants introduced by Prof. Sandhaus. Both Dr. Hager himself and the remaining dentists and the Dr. Hager Dental Practices use this material as part of their own product line, in combination with screwless, bacteria-tight, bonded crown abutments.

Currently, research is focused on the production of two-piece ceramic implants: Titanium implants are usually formed of two parts, i.e. the implant can heal beneath the soft tissues, protected from any premature exposure to stress. Only after the healing process in the jaw bone has taken place is the second part screwed into place which will later attach to the crown: the second piece. Ceramics do not allow for other elements to be easily screwed in, as screws are not compatible with ceramics (the problem of “avoiding stress”, see below). For this reason, until recently there were only one-piece ceramic implants, but these were at more risk of failing and being lost due to an increased risk of being put under stress prematurely.

What are the advantages of metal-free ceramic implants?

1. Particularly sensitive patients e.g. with increased tendency to suffer from allergies, express fears surrounding the use of metallic dental implants due to a higher burden put on the immune system. Studies do actually seem to show increased intolerance of titanium in certain patients. This may be due to genetic or inflammatory causes. For these patients, being able to avoid metal (titanium) implants by using the alternative ceramic implants means that they too can take advantage of the benefits of implant treatments. This constitutes a valuable component of our holistic dentistry approach.

2. Where conditions are not ideal (e.g. in cases of thin gums), a dark discolouration of the gums may be visible above the implant when using the naturally dark-coloured metal, titanium. Here too, the lighter colouring of ceramic materials offers a clear aesthetic advantage over the metal implants.

3. Formation of bacterial films (e.g. plaque/biofilms) on the implant surface is significantly increased in the case of titanium or even surgical-grade PEEK plastics when compared with natural tooth surfaces. Zirconium oxide ceramic surfaces, however, show a significantly reduced formation of these biofilms even when compared with natural teeth surfaces!

4. Just as with the natural tooth surface, gum grows across the ceramic material surfaces of the implant to create a tight seal. There are no gaps in the implant material. The material can offer improved bio-compatibility.

5. All major surgical procedures for dental implants can also be performed with these ceramic implants, only the procedure is very different for the surgeon when compared with the procedure used for the more commonplace titanium implants. This makes it particularly important for surgeons to be experienced in dealing with this material. When these special treatment techniques and rules are followed, the zirconium oxide implants are in no way inferior to titanium implants in terms of their durability and stability. All prosthetic restorations with dental prostheses such as crowns, bridges and full dentures are possible.

6. The healing time periods seems to be shorter in the case of implantation procedures in the jaw bone that use ceramic implants. Due to its physical surface properties, the ceramic material is even more ‘bone-friendly’ than titanium, which already exhibits excellent compatibility qualities.

7. A completely metal-free treatment solution is now possible for our patients by using these metal-free ceramic implants, as we subsequently place metal-free bridges and crowns onto these metal-free implants. These are also manufactured from zirconium oxide using CAD-CAM-guided computer milling technologies, all carried out in our own laboratories by our highly experienced dental technicians.

“In just the past few years, the field of dental medicine has shifted rather dramatically towards using ceramic implants. The Dr. Hager dentists have not only been using these ceramic implants for about 10 years now, but even carry out research in this area. As such, our patients can profit from the highly developed expertise and vast experience of our implantology team.“ 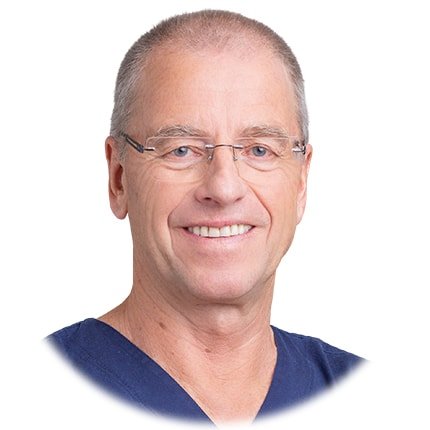 Please find more information below for patients
that are particularly interested in our zirconium oxide products:

The ceramic material, zirconium oxide, often called zircon for short, is extracted from natural zircon sand deposits, predominantly found in Asia and Australia. After an intensive cleaning processes, the material is approval for use in surgical and dental ceramic implants according to the international ISO standard 13356 (2008).

In the early research, increased levels of radioactivity were observed. By removing hafnium impurities from the material, this issue can be completely resolved. Some wrongly argue that zircon is actually a metal, as it is indeed an oxide of the metal zirconium. Zircon is not, however, a metal, it is a metal oxide, just as table salt (sodium chloride) is a salt, and is in no way a metal (despite containing a metal element, sodium).

Modifications that have been developed over the course of the development of this material since the 1990s have above all else increased the material’s resistance to breaking and the durability of the material when inside the body.

Addition of aluminium oxide, yttrium and pigments, in addition to the introduction of high-temperature (HIP) pressing techniques and variations in the processes used for finishing the material all contribute to the modern high standard achieved, similar to that seen in all ceramic systems today.

The DR. HAGER | Dentists, however, have some reservations regarding the use of screw-fixed crown abutments on ceramic implants, regardless of the screw material used. This is because screws exert a tensile force on the ceramic material, which metals are suited to, but ceramic materials are not.  The consequences of this tension can be seen as breaks at the edge of the implant, which inevitably lead to the loss of the implant.

In the international research, particular attention is being focused on the design of the material’s surface. Optimal technical values are now backed up by the research, and these values are being met by all the major manufacturers.

When using dental implants made of ceramic materials,
we would like to point out the following disadvantages:

How long do ceramic implants last?

Make sure you regularly attend dental hygienist appointments with us! Effective removal of biofilm and plaque on teeth by using proper brushing technique will bring the usable life of dental implants in line with that of natural teeth. Ceramic implants even have a lower risk of becoming contaminated.

Any cookies that may not be particularly necessary for the website to function and is used specifically to collect user personal data via analytics, ads, other embedded contents are termed as non-necessary cookies. It is mandatory to procure user consent prior to running these cookies on your website.

Undefined cookies are those that are being analyzed and have not been classified into a category as yet.

Analytical cookies are used to understand how visitors interact with the website. These cookies help provide information on metrics the number of visitors, bounce rate, traffic source, etc.